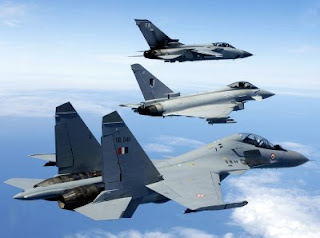 As the Indian Air Force wraps up the Red Flag exercise in USA and the Indian Navy starts preparation for the annual Malabar Series of Excise, let us take a movement to analyse the evolving strategic relationship between two of the world's largest and the most powerful democracies.
India's relationship with the USA started picking up pace from the lowest ebb after the Shakthi series of nuclear tests conducted by India in the deserts of Rajasthan. Over the years the relations have grown in complexity and strategic reach. This year the Americans are bringing it's newest Nimitz class Aircraft Carrier, The USS Ronald Reagan along with a nuclear submarine for the annual excise code named "Malabar Excise". An Aircraft Carrier and a Nuclear Submarine are two of the greatest assets in the American Navy. To bring these assets to the war games with India shows the extent of importance the American's has for a strategic relationship with India. India on it's part is fielding some of it's most potent arsenals. The recent study in America asks India to have a greater role and involvement in world politics and security including take proactive interest in maritime security.

But things was not so rosy in olden days. During cold war, India even though a proclaimed NAM member was leaning to the former USSR. That relationship greatly benefited India with total and instant access to high end technology and funds including advanced weapons. USSR also supported India many international fora including matters concerning Kashmir. America on it's part was more inclined to India's arch rival, Pakistan through which they intended to get close to main land China. Things only started changing after the demise of USSR and mostly in the late 90's. The greatest movement that changed the course of the relationship was 9/11 attack in WTC in New York. Islamic terrorists for the first time stuck at the heart of American pride in American homeland. Terrorism had finally reached American shores. India having suffered terrorism became a natural ally. Another key ingredient in the changing relationship was the rapid economic liberalisation undertaken in India. America became one of the biggest business partners for India.

The growth of the strategic relationship was gradual. In the security and defence realm, the annual naval and air force exercises which started off in the lowest level is slowly graduating to the highest strategic level. India also has had joint army exercises which has gradually grown over the years and now India has trained many American special forces in it's famed The Counter Insurgence and Jungle Warfare School, Vairengte.

India's relationship over the years with the Americans have blossomed over the years to a fully-fledged strategic relationship. Weather anybody likes it or not, America is the sole super power in he world. There is no international architecture with out the Americans. In the world of International politics, there are no permanent friends or enemies, but all decisions are solely dictated by permanent national interests. It is in India's national interest to engage America which shall remain as the sole super power in the world for the foreseeable future
Email Post